Back
Annual General Meeting 2017, some Updates
By Lorenz Trippel | News | 04.08.2017 10:29 | Views: 2931 | Comments: 2
This year's general meeting didn't see any contested votes, apart from the one for the selection of the host of the youth championship in 2019. Moscow would get it by a small margin over the Croatian proposal. The board members are elected only every three years, so the next election will be in 2018. Also the selection of the congress didn't take place because the members accepted the proposal of the german federation to select the congress only two years in advance. Surprisingly the vote to continue or stop entering online tournaments into the european go database (EGD) didn't happen due to the failure of announcing it only in the vice-president's report and not in the agenda. Still there was a longer discussion about it - with the increasing availability of strong go programs the discussion of the value of games from online tournaments looks set to continue.

Some additional points of information:
All the details can be found in the minutes. 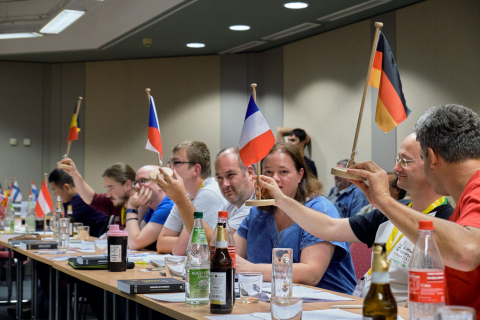 Comments:
Elad Zipper
#1
04.08.2017 23:10
Does it mean that D class Tournaments won't be allowed to be uploaded to EGD?
what the final decision about it?
Lorenz
#2
05.08.2017 0:27
As there was no decision the current situation will continue until the next AGM. It means nothing changes: Online tournaments are counted as class D tournaments with a weight of 0.25 compared to class A tournaments.