Back
Interview with Tanguy Le Calvé, the 7th European Pro
By Artem Kachanovskyi | Interviews | 20.05.2019 20:48 | Views: 6640 | Comments: 3
The 5th European Pro Qualification was held in Strasbourg (France) on May 16-19, 2019. As always, it was an intense tournament. Many of the Go players and fans all around the world followed this spectacular event.

In my opinion, there were a few factors that made this tournament especially intense. First of all, from the 1st through to the 4th Pro Qualification there was always just a 1 year gap between them. With the 5th Pro Qualification, there came a 2 year break until the new Pro is "born" in Europe. So all the players now will have to wait 2 years each time to get their chance. And secondly, this year it was hard to point out an obvious favourite. Many of the players seemed to have a similar level, and so the result was unpredictable.

The winner and the 7th European Pro is Tanguy Le Calvé from France. He didn't manage to win all of his games, but won the tournament. In the Round 2 he lost to Stanislaw Frejlak from Poland. In the rest of the games he remained undefeated, winning the final against Lukas Podpera (Czechia) by 3.5 points.

Luk_Podpera_vs_Tanguy_Le_Calv.sgf
Download Sgf-File
Congratulations to Tanguy! I hope that he keeps on improving his Go skills after this victory. No doubt, a thing such as becoming a professional Go player must encourage a person. Besides that, being a pro in Europe has its own benefits. You can see more information at the Pros page.

Below you can read an inteview with Tanguy. If you have more questions for him, don't hesitate to post them in the comments. I am sure Tanguy will kindly agree to answer them.


Q: Congratulations for becoming a European Pro! How does it feel?
A: Thank you so much, I'm filled with joy ! Becoming pro has always been a dream ever since I followed the path of Hikaru when I was 12...
And now it happened, I just can't believe it ! Right now, I just feel so happy and lucky at the same time.

Q: How did the Pro Qualification go for you?
A: This tournament was actually quite weird for me...Mainly because I played all my games with much less pressure than the last two times.
Usually my strengths are in fuseki, and in fighting during the chuban, but I have sometimes big issues in yose...
But after some recent results, I wasn't too confident with my game style so I decided to change completely my way of playing for this tournament.
I played all my games with an opening I've never tried before, because i felt I needed to go outside my comfort zone in order to show my best.
Eventually, it had rather mixed results, almost all my games started with an advantage for my opponent, but it gave me the energy to fight hard and come back.
I don't think I played my best Go, by far, and I won some games very luckily, but somehow I managed to keep confidence and try my best to reverse every difficult situation.

Q: Please tell us about your final game against Lukas Podpera 7d (Czechia).
A: On the final game with Lukan, I felt already much more pressure ! Of course we know each other well, and he has overall pretty good results against me so I knew he would feel confident.
We know each other well, our strengths and weaknesses, so the battle on the board was also a fight in the minds.
About the game, I think Lukan played really amazing !
The first joseki I chose was not a great choice, and he managed to keep the lead until end of Chuban. At some point where I could almost die, he decided to spare my life and focus on territory in order to win the game by points and avoiding a risky situation, but I believe he played a bit slack because of his lead and the whole strategy somehow backfired.
The game became closer and closer, and I'm really glad I didn't mess up yose this one time in my life :) !
Anyway it was a really nice game, and I wish there will be many more with you, Lukan. GG !

Q: How were your results in the previous Pro Qualifications?
A: This is the third time I try to become pro. The first time in Baden-Baden (2016), I just came back from CEGO training in China and was full of hope, but well you know the story, you eliminated me and became pro ;) ! The second time in Vienna (2017), was actually one of the biggest disappointment in my life...I was at the top of my shape as a Go competitor, having digested the whole training in China and showing some results, beating many pro this year, and even winning Amsterdam tournament.
But after losing a won game by half point against Lukan, and then to Oscar, I got eliminated and my hopes and confidence were crushed.
I was 100% invested in competitions, and I couldn't see any other possibilities than winning the tournament at the time, and by putting so much pressure I just broke down.
After this came a very long year where I felt pretty bad about Go and life, since they are both so related for me.
But 2018 was a blessed year, and even though I didn't play many tournaments, I met someone amazing, got my own flat, and focused on teaching Go instead of competition.
That's how today I approached this tournament with serenity...I really wanted to make peace with myself from what happened two years ago.
I just tried to enjoy every game and play what I want, and even if there was some luck and the result is not perfect, I liked it :)

Q: Please tell us about your way to becoming a Pro. How did you reach this level?
A: Enjoy playing thousands of games :)
I don't think there is one method that will work for everyone, so I just tried to do it my way. When I learn something, I usually do it on my own.
But eventually, I couldn't have reached this level without all the people who helped me improve, my two teachers from French Youth Team, Motoki Noguchi and Fan Hui, to Zhao Baolong who is a great inspiration for me (as a basketball player too).

Q: What is your current occupation? Will a new status of pro change anything in your everyday life?
A: At this day, I could say I was already being a professional, since Go is my living !
I am a Go teacher, mostly online but also in my city in France, Nantes.
I discovered that I actually love teaching, and it feels really good to share my knowledge and experiences, so naturally my plan is to continue this way !
I wish becoming pro will help me pursue my dream and live from my passion :)
You can find more about me here: www.tanguy.le-calve.fr even tho I will have to change my banner now haha.

Q: What are your Go plans for the nearest future?
A: Well I did a promise to myself, that if I become pro I would start studying and training seriously in order to reach a level that is convincing to me.
For the last 2 years, I didn't have the will to do it, but now it become sure and I want to see how high I can go :) !
Beside this, I will of course continue teaching and continue playing in the numerous tournaments...
Because I play go not only for the love of the game, but mostly for all the amazing people I met in this wonderful community we have...
It's a bliss to have that !

Finally, I really want to thank everyone who helped me get this far...
There are far too many names, but all my friends, my family, my love, and everyone who ever cheered for me once...It really mean so much to me !
Thank you ! 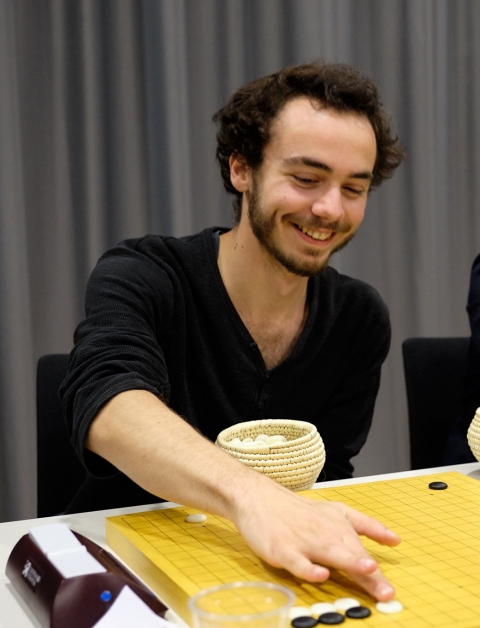