The European Go Championship is one of the most important go tournaments in Europe, let me share with you some highlights from the history of this event.

The final of the European Championship is always a spectacular event and attracts great attention from go fans both in Europe and overseas.

The European Championship 2020 was held online due to the COVID-19 outbreak. The tournament brought together the 32 strongest European go players and all games were played on OGS. As the schedule was flexible and participants agreed on playing times between themselves, many games were not played simultaneously as is the case in face-to-face events, meaning go fans could catch more of the commentaries provided by European professionals on the EGF Twitch channel.

In the final Ilya Shikshin won two games out of three against Ali Jabarin and thus won the European Championship for the seventh time.

This year once again the European Championship will take place online due to the cancellation of the European Go Congress, which would have taken place this summer in Ukraine. The host server is the same as last year – OGS, and the new dates are from the 23rd of November until the 5th of December.

This time the schedule is more straightforward: games will be played on predefined dates at 19:30 on weekdays and at 10:00 on weekends, all times in CET.

The EGF has introduced a completely new system for this year’s edition of the European Championship. The tournament will begin with a qualification phase: four groups of four players will face off to determine the strongest eight players – two players from each group. They will join the other eight players who have prequalified for the final stage due to their performance in last year’s European Championship or to their European Go Database ranking. The qualification round will take place from the 23rd – 26th of November, with the final phase for the 16 selected players taking place from the 27th of November until the 5th of December.

Live commentary will be provided on the EGF Twitch channel by EGF professionals whenever they are not playing their own games.


24 players from 15 countries ranging from 5-dan amateur to 4-dan professional will compete for the 2021 European Champion title. The highlighted players are qualified for the final phase:


More information including a detailed schedule can be found on the web page of the event:
https://eurogofed.org/egc/2021.html
The results will be published on the same page after each round, as well.

The Event Needs Your Support

Normally, the budget for the prize-money of the European Championship is raised from the registration fees for the European Go Congress. Unfortunately, this year the cancellation of the EGC has made this impossible. Last year the EGF faced the same problem and launched a crowdfunding campaign in order to be able to provide prizes to the strongest European players. The campaign was successful: 3,950€ was raised with a target of 3,000€.

This year the EGF is taking the same approach and requesting that go fans support our strongest players. By taking part in the campaign, you don’t just donate money – there are three levels of support and each has its own rewards, such as:

You can find more details and lend your support to the event at our Okpal page: https://www.okpal.com/2021-european-go-championship-november-23rd-dece/

Funds raised will be used for the top four players’ prize money. Let’s motivate the strongest European players to try their best and show us some masterpieces in such a bright and important event as the European Championship! 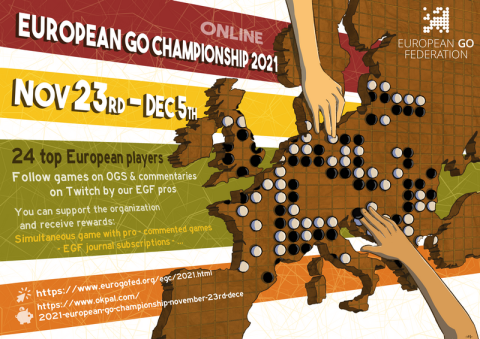