Back
China wins the first online tournament against Europe
By Artem Kachanovskyi | International | 13.04.2020 21:06 | Views: 3553
From March 31 till April 12, a new competition took place online: 1st China vs Europe Online Go Tournament. It was my pleasure to take part in this competition as a memeber of the European team.

To be honest, before the match I expected our team to win four or five games. The Chinese team looked strong, especially the four world champions. Even though all their players were amateurs, I knew that it was going to be tough for us. Yet, I had a hope that we can make it until the four titans, and maybe even try our strength against them.

The reality turned out to be much more stark.

At first Benjamin 6d from France made us all belive we can do it. He won two games for our team. But then he lost to Yu Suhao 6d. That was a big mistake.

Given the ordering of our team, I was the last player who would be called upon to play, so I had nothing else to do but to watch our players going out of the competition, one by one, defeated by Yu Suhao 6d. At some point it started not to be funny anymore. The chinese player kept collecting victories. I analyzed each of his games. Most probably he relaxed a little against the first players, as Benjamin 6d (France) and Cristian 7d (Romania) had a very good game against him. But against Ali 2p (Israel) and Mateusz 2p (Poland) he showed some very impressive play; his game was just powerful. Especially so against Mateusz.

The next one was me.

With that game I felt that I was carrying the weight of responsibility on my shoulders. It would be so good to stop the strong chinese player, and get at least one more victory for our team... Yet, I can't say that it was putting a heavy burden on me. I have enough experience to know that I just have to play my own game in the given conditions.

We started the game relatively balanced. I felt that my opponent didn't use all of the opportunities that were given to him, just like me - I made a few questionable moves. I was especially disappointed after the 52nd move, because that was a misclick. Yet, even after this, the game was still fine. But in the middle-game... I felt like I was just outplayed. It's not that there was something super-complicated. I just played in not always the best way, and my opponent kept playing correctly. Soon it was time to resign, as I simply didn't have enough territory. My opponent showed very good skill in the second part of the game. By the way, I found my game reviewed on the AI-Sensei website. Both me and my opponent made only two mistakes worth more than 5 points, both of them in the first half of the game.

artem_vs_yusuhao.sgf
Download Sgf-File
So, that was it. Nine victories straight by Yu Suhao 6d, and China wins the competition.

You can find complete results and all the game records at the results webpage.

By the way, one more tournament "China vs Europe" will start very soon. This time it will be just a team match of 10 vs 10, we will all play at the same time. Chinese side will line-up professionals, U16 national team. The official announcement will be ready soon. 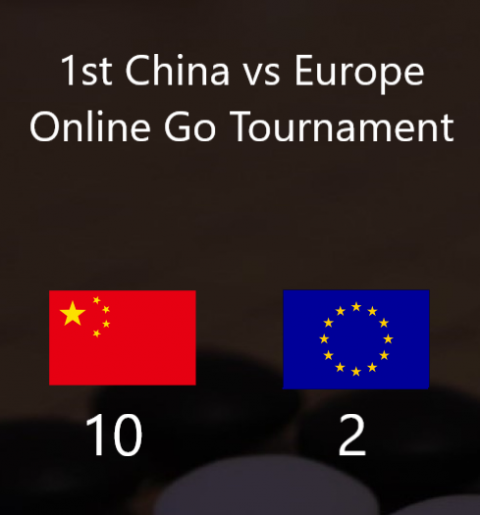