Thanks to CEGO (an abbreviation for the Beijing Zong Yi Yuan Cheng Culture Communication Co. Ltd.) as sponsor, Go Savez Srbije and the many not mentioned and invisiable volenteers the Grand Slam was again a big succes.

The venue, Tami Resort Hotels, was a perfect locations for both the Grand Slam and the Keks Memorial Tournament.

In the first round, 2 upsets were fact, Dušan Mitić 7d beat Ali Jabarin 2p and Stanislaw Frejlak 1p lost against Jonas Welticke 6d. Being scribe for the game played by Andrii Kravets 1p and Ben Dréan-Guénaïzia 7d (Better know as Ben0 and the current European Champion) in the first round was an exiting extra. I expected Ben0 as the one in topform to win this game, Andrii had a different opinion and while the game was going up and down, Andrii was from the opening always slightly ahead in the game.

All players losing in the first round played in the Keks Memorial Tournament after a free day on friday the dinnerparty was specially for them a big succes.


Asking Mateusz how the tournamen was for him:
"winning 3 out 4 games is good, just losing the last game and not the first one would have been a lot better".

Friday the 2nd of December again a day with an upset in the quarterfinals of the tournament.
Frederik Blomback 7d was able to beat Mateusz Surma 2p, and so get a place in the semifinals.

Saturday the 3rd of December, a day with a big surprising upset in the semifinals, where last years winner Artem Kachanovski 2p lost against Jonas Welticke 6d from Germany.

On sunday the 4th of december, a complete upset was seen when both in the final as in the small-final both pro's lost against amateurs.

A few questions answered by Jonas Welticke after the tournament:

2. Who introduced you to the game?
I got introduced by the anime hikaru no go and afterwards I realized that one year earlier my dad gave me a goboard as a gift. Shortly after I joined my local goclub and got taught mainly by Thomas Brucksch.

3. What are your goals in regards too Go?
Become European champion, become pro, and teach other players to live up to their full potential.

4. Do you have a favourite topplayer from the past or present?
I always loved watching lee sedols games and I was always proud that, probably because our styles are somewhat similar, he was the pro where I had the best prediction rate.

5. Which Go player would you like to talk to if this would be possible?
I like talking to most go players and I did a podcast for a while at "stumble and fly" though out of the circa 10 episodes I only uploaded 1 so far oops ???? But Ke Jie and Li Zhe would be really interesting to talk to.

6 .What would you like to ask them?
Why does black go first? And a similar question: What is the meaning of life?

7. Is there a player (from the past or present) you would like to play a game with?40 hour game over a week time against Shusaku in a beautiful temple sounds like I would really appreciate it.

8. What does Go for you mean in 1 word?
Weightlessness


Meanwhile in another conference-room in the Hotel the side tournament was played.
In addition to the CEGO Grand Slam 2022, the Keks Memorial (in memory of Mijodrag Stanković 5d better known as Keks, one of the strongest players in Serbia) was played.
Who was Keks?


Luka Stanković like most children of go players, knows the rules of the game and played as a child.
Luka was daily on site showed a lot of interest in the games played.

Ben Dréan-Guénaïzia 7d after losing to Andrii (his remark: you cannot win them all) he started to play in the Keks Memorial, ofcourse winning it.

All resultes for the Keks Memorial Tournament can be found here.

All Results and most played games of the Grand Slam can be found here.

Many thanks to Saša Kitanović and Marta Prelić who made all the picture during this tournament.

More Go Picture of Marta Prelić can be found here.

Special thanks should go to all organisers, visible or not without whom all this would not have been possible. 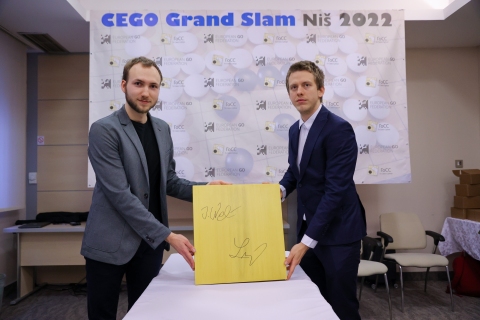