Back
42. Berliner Kranich Tournament: a tournament that survived atomic explosion
By Liubov Krainova | News | 07.12.2022 19:27 | Views: 513 | Comments: 1
This weekend, 26-27th of November, one of the oldest and most well known European Go tournaments took place in Berlin. This tournament's tradition goes back to the year 1981, when it was took place in German Democratic Republic for the first time. Having survived the collapse of the Soviet Union, the Chernobyl nuclear disaster, the breakup of Yugoslavia and many other historic perturbations, Berliner Kranich is an event that has now been held annually for 41 years! It was cancelled only once, during 2020 and the Covid pandemic. In 2021 the tournament already recommenced, with some standard «distance-desinfection-and-masks» measures. This year, as all the restrictions finally fell apart, Berliner Kranich is flourishing again.

The tournament gathered 89 participants from Poland, the Czech Republik, Sweden, China, Russia, Korea and Germany. In the year 2022, Berliner Kranich was the biggest German Go tournament.

As expected, the first place went to Kim Seong-Jin 8d. Actually, none of the games of the South Korean master even reached the counting stage: all his opponents (including Lukáš) just resigned. Lukáš commented on his game with Seong-Jin: “I just made one mistake, but with the player of his level even one mistake is already fatal”.

Consequently, Lukáš Podpěra 7d took second place. 3rd place went to a German player Arved Pittner 5d, who recently also gained the title of the Berlin Champion, after winning against his most serious rival Johannes Obenaus 6d in the final game. In general, the tournament was calm, but specific byo-yomi settings added extra spice to the games. 45 minutes of the basic time were followed by «progressive byo-yomi». Nowadays it is a rare case that you see such byo-yomi on the tournament, but Berliner Kranich keeps the tradition. The idea of progressive byo-yomi is that the player has renewable 5 minutes, during which he has to place on the board first 15 stones, then 20, then 25 etc.

Where is the trap? It is in the timepiece! Take a look at this mechanical old competition clock. The clock hand is settled to the «11» position, and when it reaches «12», the small red flag falls and you loose by time! The problem is that with this timepiece you can’t really follow exactly to see just how much time you have left, and so all too often the flag falls unexpectedly. But the most impressive was the leisure-time program of the tournament. Two professional players – Mateusz Surma 2p and Young Sun Yoon 8p - came to Berlin to share their skills with the participants!

Mateusz Surma was helping the players to review their games during the whole two days of tournament. He also brought Tsumego books from the series “You won’t get dumber while thinking”. All the tsumegos in the book he compiled himself, and it took him more than a year. “I was going in a reverse way, first compiling complicated tsumegos, and then adding or removing some stones to make task easier and to adapt them to different levels”. Currently Mateusz is working on creation of an online platform where freelance Go-teacher would be able to offer their services. This is an innovative idea for the European Go! Young Sun Yoon 8p is the Korean female world champion and winner of five other Korean titles (Kuksu Mountains tournament and Haojue Cup). You may know her by the youtube channel “Yoon’s Baduk Cafe”. Currently she lives in Hamburg and teaches Go. Besides her main school, in 2020 she launched one more Go project – “Awesome Baduk” – in tandem with Yeon Woo Cho 2p (whom you may also know by her youtube channel “Go Pro Yeonwoo”).

For anime fans: a game played between Hikaru and Korean player Hon Su Yon in the 36th series of “Hikaru no Go” is actually the game of Young Sun Yoon (white) against Yi Cheong Weon (black) from the year 1995.

At Berliner Kranich, Young Sun Yoon 8p was commenting top-boards games, making reviews for anyone who wished, played a simultaneous multiboard game against 8 players and even held a lecture.

She shared: “I once played komoku as the first move and my teacher immediately told: “Wrong!” How can it be wrong, I thought, it was just the first move! But he continued insisting it is wrong. Later he explained, to play a 3-5 (“horizontal”) komoku as the first move is impolite in Korea! Another komoku (“vertical”) is polite”. For those, who were not satisfied with only 5 games in the tournament, there was an additional marathon competition. The winner of the marathon, Elias Stern 14 kyu, managed to play ten 19x19 board games in the breaks between the main tournament! Second and third place in the marathon went to Jasper Zogel 25 kyu and Riku Kobayashi 5 kyu. Berliner Kranich is supported by German Go Federation, Berlin Go Association and a student organization Humboldt Initiative. The first Berliner Kranich took place at the Palais am Festungsgraben, where 1950-1990 the Society for German-Soviet Friendship was allocated. For the last 25 years, it is the Humboldt University who has been hosting the tournament.

I don’t know whether Alexander von Humboldt ever encountered Go during his innumerable expeditions, but if he were present at Berliner Kranich 2022, he would definitely enjoy it! 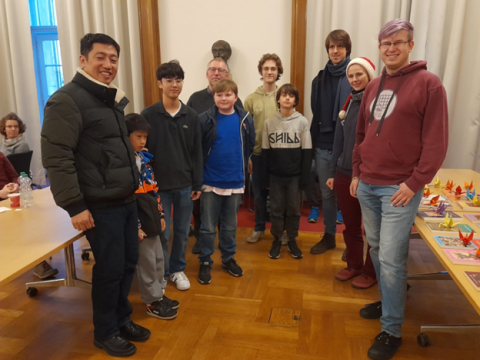 Comments:
Tony Collman
#1
29.12.2022 21:31
If I've understood the text properly, Teacher Young Sun is demonstrating the 'polite' komoku in the photograph.