Back
Special General Meeting January 2021
By Lorenz Trippel | News | 06.02.2021 20:07 | Views: 1769
Due to the uncertainty caused by the Covid-19 pandemic many of the administrative and planning tasks of the EGF couldn't be handled at the usual Annual Meeting in July 2020. Several countries couldn't vote at that meeting as they had lost their status as a developing country, and they would have needed to pay 200 € instead of the reduced fee of 50€. This was the reason this special meeting got set up to give all participants time to create a better fairer fee system which would be presented and voted upon in this special meeting. In the meantime the European Go Cultural Center in Amstelveen near Amsterdam was sold and with the financial proceedings from this sale the Iwamoto Europe Foundation will be set up.

Below I list some of the highlights:
All the details can be found in the minutes or in the 5 hours recording of the online meeting. 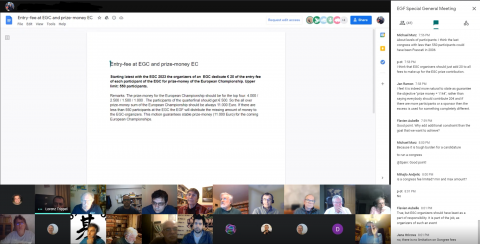