Back
Annual General Meeting 2021, some Updates
By Lorenz Trippel | News | 07.08.2021 10:09 | Views: 1213 | Comments: 2
In 2021 the european congress was again canceled, and so an in person meeting was not possible. Thus all country representatives had instead to sit in front of a camera! 26 of the 37 countries joined the online meeting. Contrary to the last two meetings we could finally agree on a decision for a new membership fee system, and the election for the two board members for the Iwamoto European Foundation IEF also happened this time.
Many more interesting reports, like the one about the EGF Academy, or the one about the european Seygo tour, can be read in the minutes. 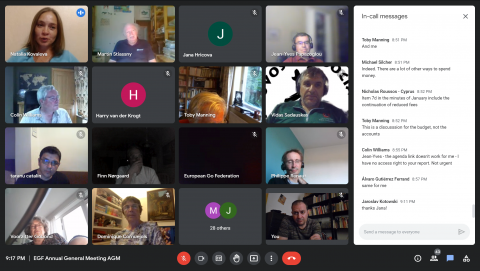