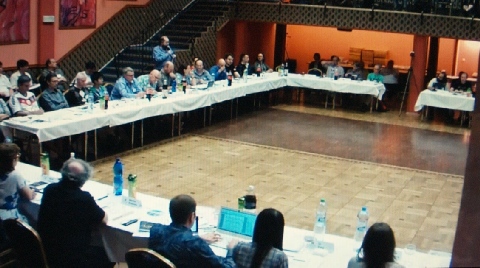 This year's AGM was rather a calm one in comparison to the one last year. First the countries reps had to line up to get their voting power written on their voting ballot paper, bigger countries had 4 votes and the smaller ones only 1. In total there were 22 countries present, special guests like the board of the EGCC (European Go Cultural Center) and the representatives from the Nihon Kiin, China Qiyuan, IGF, AGF, CEGO and Mr. Ge Yuhong from the Ge Yuhong Academy.
The board of the European Go Federation got reelected for the next 3 years which started a discussion to have only 1/3 reelected each year but as the constitution doesn't mention anything will have to wait see step down some executives before their 3 years term some time in the future to get this mixed up a bit ...
Let me list some of the important decisions and presentations of the meeting: All the details can be found in the minutes.
No comments posted...