24 top European players (passport of EGF member country required) will participate in the event. They can be either amateur or professional players.

This is a bonus point A tournament, the first 8 players will win points for the European Grand Prix.

This event will be submitted to EGD as a class A event (anti-cheating measures are implemented). 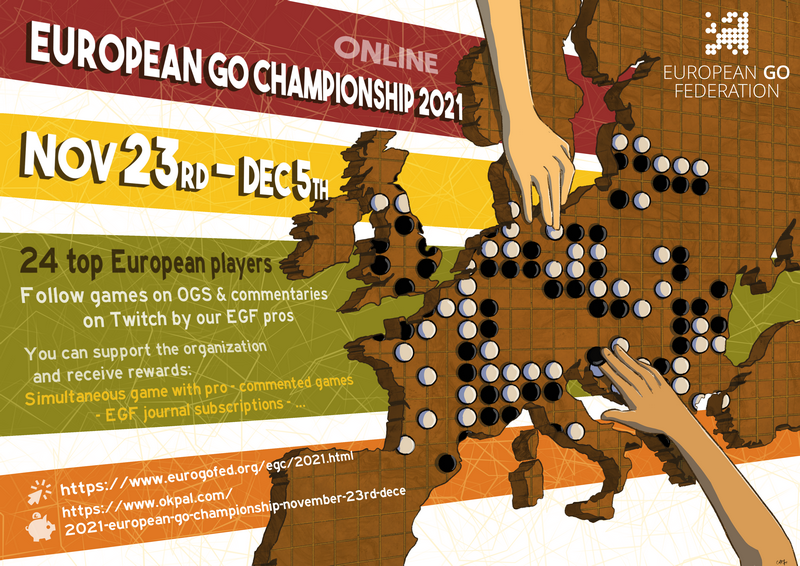 
Tie-break: Igor can't play, hence Nikola Mitic and Viktor Lin qualify. They will play at 4pm to define who is first in group D - Nikola Miitic won and got  the 1st place

All games in November/December 2021, time announcements in CET = UTC+1
The late game-start at 19:30 might be changed by the players as long as they play on the scheduled day


*** Group rounds ''''
The seeding for the players 9 to 24 will be done according to the rating list of the 15th November 2021. The groups will be generated by drawing out of four pots (9-12, 13-16, 17-20, 21-24) on 21st November 2021.
''' Last 16 pairings '''
After the three rounds in groups in each group the top 2 players qualify for the last 16. These 8 players will be paired against the already qualified 8 players in the following way::
First step: Build 4 pots:
-- Pot 5 with the top 4 rated and prequalified players (Ilya Shikshin, Artem Kachanovskyi, Pavol Lisy, Ali Jabarin)
-- Pot 6, the left 4 prequalified players (Andrii Kravets, Tanguy Le Calvé, Anton Chernykh, Benjamin Dréan-Guénaïzia)
-- Pot 7, the 4 winners of the groups
-- Pot 8, the 4 second placed players of the groups
Second step: Drawing Pot 5 against Pot 8 and Pot 6 against Pot 7. This results in the 8 pairings for the last 16 round
''' Quarterfinal '''
The eight winners will be ordered according to their EGD-rating of 15th November 2021.
The pairing for the next three rounds (quarterfinal, halffinal, finals) will follow the published brackets-view (1-8, 4-5 upper half, 3-6, 2-7 lower half)

Control-system:
a) Camera-control only in all games from the first round till quarterfinals. Players will record themselves playing as well as their screen - to be kept until the next phase
b) Camera-control with proctors for the half-finals and finals except if players agree otherwise
c) Always possible to play from home

In case of a claim, the game will be sent to the anti-cheating commission: Antti Törmänen (1p), ....

Proctors:
The national go organization is responsible for nominating one (or several) proctor (s) for its (maximum 4) participant(s) to semi-finals and finals.

Time settings: Fischer Time, 60 minutes basic, 30 sec per move additional - OGS server to be used as it enables Fischer time - Chinese rules (komi 7.5), Nigiri in all games, except in the second game of a best of three series.