The C league is an annual 7 round team tournament with teams consisting of 4 members, this year it was held in Quzhou where 26 teams fought for the top 3 spots qualifying to play in the B league.

*note:the C league is held concurrently and at the same venue as the B league and female B league. The European team (in board order):

the 4 players were chosen from the 5 EGF pros, the 5 played an inner preliminary where Artem finished 5th and so he didn't make the team this year.
(and since we will have 6 soon, there will be more competition for these spots next year)
the board order was determined by EGF rating at the time of the team's creation.

It was by our request that the team was created, a year ago we approached Li Ting and asked her if it would be possible to create a team and participate, a few months later we got confirmation we can play, and Li Ting even secured a nice sponsorship for the team.

Initially our intention with going to the event was getting some international tournament practice, in no other event can we get almost 30 tournament games against Chinese pros. Almost all of the players participating in the C league are active young professionals, Chinese teams are allowed to include one amateur player on the 4th board, those were usually top amateurs like Hu Yuqing (twice WAGC champion) and Wang Chen, or young players who are trying/expected to turn pro. Meanwhile the 1st and 2nd boards were usually at least from the top 250 according to China's pro rating list, one very notable 1st board was 2 times international tournament finalist Qiu Jun 9p (played the final of Bailing Cup against Ke Jie in 2015) who just a year ago was still playing in the A league (his team finished 3rd in the C league this year). Round 1:
0-4, not the way we had hoped to kick things off. I lost a half pointer after making a small endgame mistake which was pretty painful, but at least it helped assure us that our opponents are beatable.

Round 2:
1-3, Mateusz got our first win, this was a small boost for the rest of us, meanwhile on the 2nd board I had one the most regretful losses in my life, blundering away a completely won game which also cost us a tie score. Falling asleep that night was not easy...

Round 3:
2-2, Ilya won on the 1st board against Shi Yulai 1p, who is a very promising upcoming player, a couple years ago he was the strongest student in Ge academy (the school participants in the CEGO program go to, also currently the strongest go school in China), won't be surprising to see him playing in the A league soon.
The game was a classic Ilya game with lots of fighting and huge moyos, the opening was favorable for Shi but later Ilya killed a corner and followed up with clean endgame giving his opponent no chances to come back.
Mateusz beat Zhu Fengyi 1p for his second consecutive win, earning the team a tie in this round.
the atmosphere at dinner was noticeably lighter this day. Round 4:
2-2, another tie, this time Pavol won against Li Xiang 4p ranked 198th in China, this was officially the highest rated opponent our team beat, Ilya's opponent from round 3 is considered stronger but since he hasn't been pro for long his rating is lower. Pavol killed a group in an early fight and played very safely keeping his lead for the rest of the game.
Mateusz got yet another consecutive win this time against Yang Qian 3p (who earlier this year won the St.Petersburg tournament), at this point there was some hype starting to build around Mateusz, personally I was very impressed that he not only won 3 games, but also won them convincingly and just straight up felt like the better player in most of them.

Round 5:
2-2, I finally picked up a win on the 2nd board against Xu Jiawei 2p, it seems both of us have a pretty calm style, after a successful opening where a large side all converted into points and settling all of my groups my opponent simply didn't have enough. After throwing a game or two earlier in the tournament I was worried I'd end up with a 0 score, so getting a win here was super relieving.
The other win came from none other than Mateusz on the 4th board, by this point the rest of the team is feeling a mix of happy, jealous and shocked, and the hype around him from Chinese go fans was huge.
After this round there was a break day. Round 6:
0-4, our good run didn't carry over the break, we played the team which was probably our weakest opponent of the tournament and we didn't win any games. Personally this was the first game of the tournament where I felt like I just played bad and didn't even make it hard for my opponent.
Mateusz's dream run was ended in a close game against Yao Xiaotong 1p where he lost by 2 points.

Round 7:
0-4, after round 5 our team placement was getting better and we were feeling quite good, hoping to even pick up a win in one of the last two rounds, but unfortunately losing all games in rounds 6&7 meant we finished on a low note in 26th place.

Prize money (pre-tax):
Ilya, Ali and Pavol each received about 25,000 RMB (~3300€).
Mateusz's impressive run earned him 50,000 RMB (~6600€).
our sponsorship was quite generous, and definitely the largest one in the C league, probably even larger than some B league teams.
winning all 28 games would have gotten the team around 90,000€!, so we must try hard to win more games next time. and last but not least, a shout-out to the team’s sponsors: CEGO, Tsinghua Weiqi Fund, Tsinghua Redbud Capital, Ge Yuhong Go Academy and special thanks to Li Ting for putting the whole thing together.
Game records: 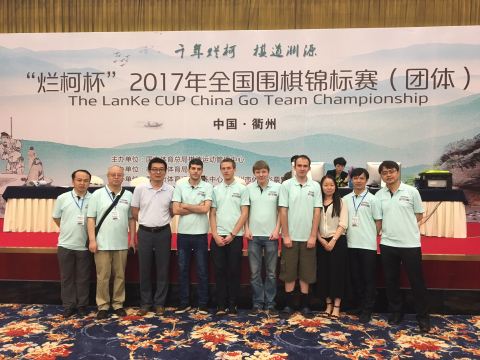