In my opinion, this year the European Students Championship had exceptional conditions. Not only that all the participants had free accomodation, but there was also a prize fund of €1000 which was shared between the winners of the tournament.

The tournament took place in the very center of Kyiv, the capital of Ukraine. The Organizers were lucky enough to have secured use of the main hall of Kyiv City Council as the tournament venue. It's located just a few hundreds metres from the legendary Independence Square, the center of all the country.

This time my role was to act as a game reviewer for the participants, and to help with the organization. It is very rare for me to look at the Go event from this perspective, because usually I am one of the players.

Right throughout the tournament I enjoyed a friendly atmosphere around me. The sponsor of the tournament brought some generous surprises for all the participants: pizza on both days for their lunch, free rides on the electrical scooters, and a party in the pub after the end of tournament.

Lukas Podpera 7d from Czechia was the favorite to win the tournament. He won all of his games confidently, thus becoming the European Student champion 2019. Just one of his games was close - against Mihai Serban 5d from Romania. That one Lukas won by half a point.

ESGC-2.sgf
Download Sgf-File
The second place was taken by Alexander Matushkin 5d from Russia. He lost only one game - that was to Lukas.

The third place was Valerii Krushelnytskyi 5d from Ukraine. Both him and Mihai Serban 5d from Romania had 3 wins out of 5 games, but Valerii had a higher tie-breaker score. So Mihai took 4th place in the end.

It was not only money prizes that the winners received. Each year the European Go Federation provides special prizes - trips to the Asian students competitions. One of them is the World Student Pair Go Championship in Japan. Another one is the "College Championship", sponsored by the Ing-foundation.

In parallel to the Student Championship, at the same venue there was a tournament for children under 16 years old. There were 26 participants, including one guest from Slovakia. The winner of the tournament was Vsevolod Ovsiienko 1d. He had won the European Youth Championship U12 earlier this year.

I think it was a great time for all the players and the organizers. For me personally it was a pleasure to be present at such event.

Next summer one more international Go event will take place in Ukraine - the European Go Congress 2020. For more information about it please see the article about the EGC 2020. 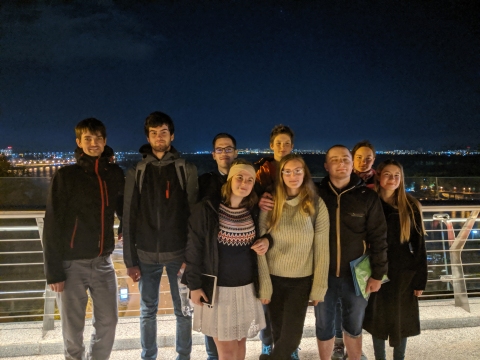