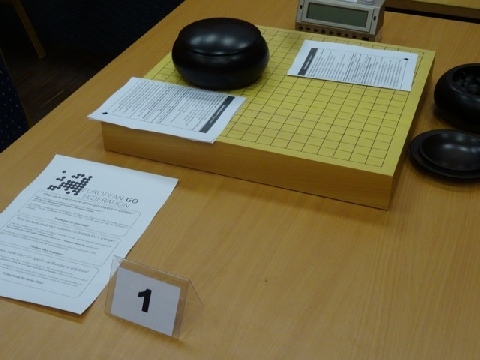 At the European Go Congress 2015 in Liberec, together with Prof. Mei Wang (WHU, Otto-Beisheim-School of Management, Germany), I conducted a survey among the participants. Here, I would like to summarize the main results:

Nearly 300 players participated. 20% of them were female, 80% male. Their average age was 34 years, the youngest being eight and the oldest 92. On average, they have played already for 15 years. Only 10% have played Go for less than three years, so Go players who participate the EGC tend to be experienced.
We also asked when and where the players had learned Go: the average age was 19 years. Fig.1 describes how this starting age was distributed. So, it seems that many players started during their early adulthood, probably while being a university student. There is, however, a trend in the data that the younger generation (below 30) tends to learn Go already in high school (between 15 to 20 years).

Where did the participants learn go?

Here the answers were very diverse (see Fig. 2), but the internet plays already an important role, particularly when considering that the survey contained many long-time Go players who couldn't possibly have learned Go online, since at their time there hasn't been the internet around yet.

Nearly two third said that they had not only previous experience with teaching Go, but also managed to teach somebody who still plays Go! So I would venture to say: yes, Go players are Go teachers! And what are their hurdles to overcome when teaching Go? Most (52%) agreed that it is difficult to keep the interest of people, since Go is difficult to study. Also a large proportion (47%) said that it is difficult to find interested people at the first place. Interestingly, other reasons were not as important, in particular, only 6% complained about lack of adequate teaching material. This is interesting since it implies that additional efforts should most likely go to marketing and to develop ways to keep the interest of beginners rather than on teaching material.
There are also some characteristics that seem to correlate with being a successful Go teacher: they tend to be strong (no surprise!), older, tend to notice prejudices about board games as a potential problem and see Go more than others as an "exciting competition".

Where do Go players play?

We asked for playing frequency at Go clubs, with friends and online. The largest frequency (on average nearly once per week) was online playing! The internet has become commonplace in the Go community in Europe, that is obvious from this result. – Recall, that we only asked Go players who actually still came to a real life tournament!
Talking about tournaments: participants had on average played already 56 EGF-rated tournaments in their lives. The most active players tend to be strong players (not a surprise!) and kids – who probably have simply more time for their hobby than adults!

What differences between women and men do we observe?

The most striking difference was that women played more Go – but less frequently at tournaments! A possible reason might be that women on average are less keen to compete. This might leave only the more active female players participate at the EGC which explains why those women who participated play in general more frequently than the men.
The gender imbalance (80% to 20%) was higher with older players. Analyzing the data suggests that this is probably not because women tend to drop out more frequently, but because nowadays more women learn Go.
The starting age distribution is the same for men and women.
As in chess, we observed that the average playing strength of men was higher than that of women. (The author lost enough games against female opponents to know not to generalize this result.)
The proportion of female participants among the DDK players was indeed roughly equal to the number of male participants. At least on beginner level Go seems to be as attractive for women than for men.

Main factors that we found to influence playing strength are the age when players learned Go (the younger the better) and whether they play a lot online and in tournaments (the more the better).
The Table shows some characteristic differences between DDK, SDK, low and high dan players. In particular, DDKs were on average a bit younger (obviously, since there were small children among them), while the youngest age average was found among high dan players. The reasons for this are up to speculation: it might be due to an increase in playing strength with the young generation or because older high dans tend to be less attracted by such a competitive event. A clear result, however, is that stronger players on average started playing Go earlier (for high dans, on average, in early high school). Also, as mentioned above, the proportion of female players decreases with playing strength from 48% (DDK) to only 5% (high dan).

Finally, a big thank you to all participants for filling in our surveys, and to the EGF for supporting this project!

Marc Oliver Rieger
(Professor at the University of Trier, Germany)
No comments posted...