Back
Korean Prime Minister Cup 2016
By Marika Dubiel | International | 13.09.2016 20:17 | Views: 3598
This year, for the 11th time, the Korean Prime Minister’s Cup (KPMC) was held. Between September 5th and September 7th, 54 national representatives met in Julpo to compete in a 6-round Swiss-style tournament. Surprisingly, the majority of the players (thirty of them) came from Europe with their strengths ranging from 6-dan to 10-kyu and ages ranging from 17 to 71! This shows again and again that Go is a truly universal game for everyone.

The tournament took place in Buan County, which has a special relationship with Korean baduk. It is a birthplace of Cho Nam-cheol – the founder of Korean modern Go, Kitani Minoru’s first insei and an uncle to a famous professional player Cho Chikun (9p). Also, one of the world’s top players and Go legends Lee Chang-ho (9p) was born in Buan. No wonder that the county calls itself “the Mecca of Korean Baduk!”

And now back to the tournament. Although the top three places were taken by Asian representatives, only one of them has remained victorious throughout the tournament: the winner Rundong Yang (China). He was followed by four non-European players, who lost one game each. The European players who scored the most wins all lost only two games, and they were eight of them: Jan Hora (Czech Republic), Reem Ben David (Israel), Tanguy Le Calve (France) and Grigorii Fionin (Russia), Mykhailo Halchenko (Ukraine), Weiying Sorlin (Sweden), Sergiu-Dan Iugulescu (Romania) and Gabriel Mercier (Belgium).

With the thinking time of 40 minutes per player, followed by 3x30 seconds byo-yomi, some players succumbed to time pressure, as Herman Hiddema (4d, the Netherlands) confirms in his report. Here, he describes the encounter with the tough 4-dan from Macau, who started making mistakes in byo-yomi, giving Herman the chance to turn the game around and win it in the end.

Herman shared his adventures in Dutch with the curious Dutch players, and described a tournament experience, which will probably sound familiar to the most of the Go players (the original report was in Dutch, here is my translation – MD):

“Sometimes you have these games… I had one in the 5th round against a 5-dan from Vietnam.

My opponent wants too much. He wants to kill my group. He goes all-in and it ends in a capturing race which I eventually win. My group lives, his doesn’t. We haven’t even made it to the middle game yet, and I am already 40 points ahead! Sure, there is still a little bit of bad aji (he can make a multiple-step ko), but I do not worry about that at all. This group is in my pocket. End of story. It’s time for him to give up. But he doesn’t do that.

I ignore his two approaches, and with the third one he makes a one-step ko. No problem, this ko is so big that I cannot lose it. And I can even take it first! He makes a ko-threat. I fantasize that I can answer it, because I still have internal ko-threats. A fantasy. He has more internal ones. He brings his group back to life. Ok, no need to panic... I get two moves elsewhere in return. I’m still 20 points ahead! We continue playing, he does his best, and in the end game the difference is about 10-15 points… And then I slam the last nail into the coffin . We play a ko worth 3 points. I ignore a ko-threat. Suddenly it is about 30 points, and he has more ko threats. What have I done? How have I managed that? Now I have to give up. Disappointed and angry at myself things do not really go well in the last round, so I end up with three points. Realistically speaking, three out of six against higher-ranked players is not bad at all. But it does not feel this way… Sometimes you have those games. We all know them…”

Thank you to Herman for contributing to this article and sharing his photos! The full results can be found here. 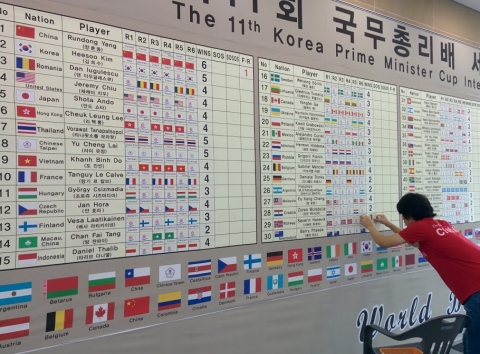