Back
Close Encounters with the Middle Game, a readers review
By Tony Claasen | Reviews | 23.10.2017 16:24 | Views: 2911
The writer Michiel Eijkhout created a nice book with 32 re-edited articles from the 50 (Move to Move articles) he originally made for the Dutch Go Magazine, each article in itself could have been in this book.
For in interview with Michiel Eijkhout go here.


The book is clearly built around 5 themes each having a different view on the types of play being highlighted in the chapters. When looking at the curent level of go, the existing way AI (in the person, or should I say machine of AlphaGo) has been able to defeat the strongest players at alive, showing us that the standard way of playing no longer exists in some sort of way. Human players will be forced to use a different way of looking at the game of go.
Close Encounters with the Middle Game, shows us that actually this way of playing is what makes a professional player so much stronger compared to amateurs. Playing out of the box, looking for the unexpected, sometimes playing just a simple and save move than a completly crazy move to win the game. AlphaGo in a way does not change this, it only brought the game to an even higher level of playing.
Close Encounters with the Middle Game, brings you closer to a professional level of playing go and all games used as an example in the book can be found easily online so you can have a look and review the games while reading this book.

The Five Themes are:


With the 32 articles, the division into five themes and the choice to use professional games to explain each one of them in different chapters, this book is a must have for single digit kyu players to really learn how to look at games in the different kind of positions which arrive after the opening has been played out. The clear examples which are used and the easy to read explanations make it a book even non-english persons can follow without a lot of knowledge of the english language.
Each page has a maximum of three diagrams, this makes them clear and the explanations to each of the diagrams easy to read.
Furthermore I would say that even players up to three and even four dan could still learn a lot from the way the different ways of aproaches of the middle game are explained in this book.

In most of my own games and in most of the games which I saw in the many tournaments I visited over a period of almost 40 years, in almost every match it was the middle game that was the deciding part. The opening was mostly only deciding when a joseki was mishandled by one of the players.

Reading the book and analyzing the different chapters, cleary taught me, or reminded me, to look at the end of the opening and beginning of the middle game in a different way.

A nice chapter on how to handle frameworks, on the one hand how to build and expand a framwork and on the other hand how to reduce a framework.
It explains in-depth how to go about building or reducing, sometimes starting to defend ones own weaknesses to start with as the best way to play.

Here the challenges of deciding whether to reduce or invade an opponent's territory are discussed.
In some nice examples it is explained to the reader how and why to decide between an invasion or a reduction, and in some cases even a combination of both, so as to get the maximum out of a reducing action.

Part 3 "The Art of Trading"

Amateur go players tend to cling on to their played stones in an extreme possessive way. This chapter offers a good way out from this way of thinking. With good examples on how to use stones for a sacrifice to gain in other places of the board, making you more flexible in the way you can play in a game.

Sometimes a direct confrontation to get what you would like to have is not working, preparation is needed to first get one or more stones into places so that they can help you to fight the fight you are looking forward too. A ladderbreaker, a stone on a vital point so you can make use of the weakness in the position of your opponent is sometimes all you need to fight the war in the way you want it.
The reader learns in this chapter that brute force is mostly not the way to fight in the middle game.
A tricky (not trickplay) and deflacting way of playing can be very helpfull to reach your goals in the middle game fights that occur in your games.

Part 5 "Encounters with the Unexpected"

Here comes a part some go players who like to think out of the box, and who like to tread their own paths, not just playing the standard moves, will love to read. Playing light moves and looking for exchanges between territory and thickness or a trade in territory is highlighted in this chapter using unusual moves. This chapter offers you a way to get a deeper insight into playing and looking for the unexpected moves waiting for you to win the game.

Part 1 "Frameworks of Territory (Moyos)" I liked a lot as I like to play moyo games when receiving handicap, especially when playing my teaching games with Kim Seungjun 9p (Blackie).
Part 4 "Mean Fighting" and 5 "Encounters with the Unexpected" are my personal favorites as they fit in with the way I like to play. Looking for the unexpected and distracting moves to win a game and learn more. The game of go is not about just winning this one match, it is about getting better every day.

This book offers a lot of ways to improve your way of playing in the middle game and so become a stronger player with a better and stronger view over the middle game.
In my honest opinion this book is a must have for every single digit kyu player and for players up to three dan to get a better knowledge of the middle game. This book teaches you how to bring more imagination and vision into your playing, and to let go of strict standards of playing.
Close Encounters with the Middle Game is an investment worth making for every player who seriously wants to become a player on a higher level. 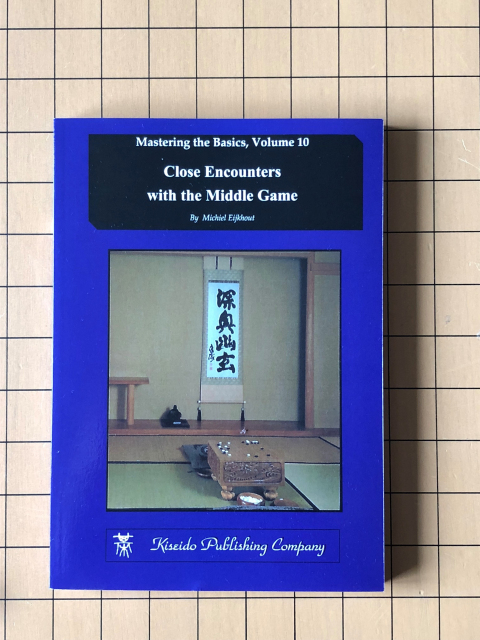