Michiel has been one of the strongest Dutch go players for the last 25 years. He learned the game of go as a 13 year old boy from his math teacher at secondary school in Nijmegen, and although he never became Dutch champion (in those days the Netherlands was one of the strongest European go countries and the competition was therefore intense) he did represent the Netherlands in 1994 and 2001 during the World Amateur Championship in Japan. With his wife Yvonne he participated twice in the World Championship pair-go and of course he played both in the team tournament and in the individual mindsport games in Beijing and Lille.
You can see him glowing when he talks about the famous Amsterdam matches against the Provinces of the 80s and 90s, in which Michiel together with René Aaji, Gilles van Eeden and Frank Janssen were part of the Provinces team, and who always wanted to teach the brazen Amsterdammers a good lesson.
During his studies Michiel did little else besides playing Go and studying Go, very little indeed apart from a single exam. During the day on a 19 by 19 board, and at night in his dreams, where he wandered through worlds consisting of a huge goban with constantly new moves and fantastic variations. He never made any moves in those worlds, but they are the inspiration for this remarkable book.

Michiel has been supplying small pieces about the middle game to the Dutch Go Magazine for more than 20 years. Close Encounters with the Middle Game is a selection of 32 of these pieces, especially intended for players from 5 kyu to 2 dan but the content is certainly also interesting for stronger and ambitious weaker players.
Michiel has always enjoyed playing and reviewing professional games, but he often finds the comments very superficial and incomprehensible to kyu players. In Close Encounters he has tried to dissect one position or move in a game that intrigued or surprised him, and to answer the question: Why is the professional playing here? What were the thoughts of him/her and what did she/he consider for the choice made? He also explains why a number of similarly obvious moves are not so good, or very bad, or perhaps even quite possible.
The book consists of 5 parts, each with 7-8 chapters. Moyos, Invading or Reducing, The art of Trading, Mean Fighting, and finally: Encounters with the Unexpected.

When asked which parts Michiel thought the best or most useful, he answered without thinking: Of course the first chapter "Speeding Ahead" and after a moment of reflection a short story about ladders from part 4.
In "Speeding Ahead" after 15 moves the game board is roughly divided into 2 parts.
What to do now? By using 12 diagrams, the course of the match up to move 25 is being analyzed.
With a short story about ladders, Michiel sheds a new light on the proverb: if you don't know the ladder don't play go: Ladders on the board, ladders in the head, Oops not 1 but 2 ladders, how to prevent the ladder. There are many more ladders during a single go match than those on the board.

All the chapters are only about a small part of a match. The result is always mentioned with a few peculiarities about the movements. The players and the match are listed so that you can search for it and replay the entire game.

I want to express my thanks to Marianne Diederen for helping out interviewing Michiel Eijkhout.
Where she created the dutch version I was able to make an english version of the same interview. 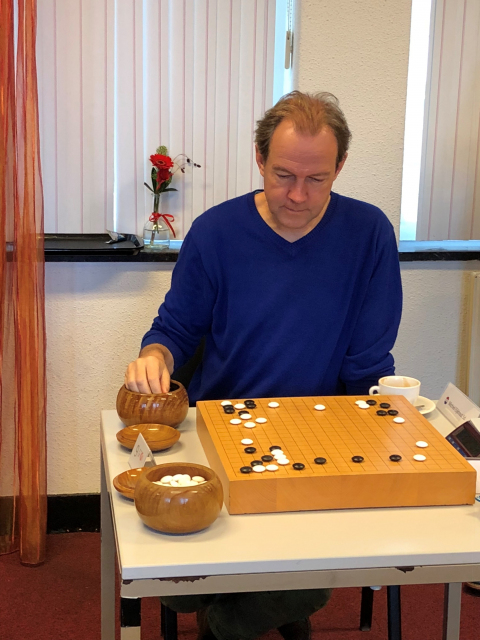