The tournament has a qualification event open for all professional players, and a separate qualification event for the ladies and amateurs. There are also a number of players who enter the final stage of the tournament without having to fight it out in the qualifiiers. They are called the "seeded players", and are usually the strongest players such as Ke Jie, Park Junghwan, and several others.

As well as all the above, Europe and America are invited to nominate two players to play in the final stage.

The final stage of the MLily Cup starts with the 64 qualified players and is runs in a knock-out mode. That means that if you lose, then that is the end of the competition for you.

In Europe we have a special sytem for nominating participants to the Far East events. Players collect points when taking prize-places in the biggest European competitions. You can read a detailed document describing the system. Current standings can be found on the standings page.

According to the nominations system, it was me and Ilya who were chosen for the MLily Cup this year. I participated just once before in a tournament of this kind: the 24th Fujitsu Cup in 2011. I played with Kim Jiseok 9p from Korea and lost that game. Ilya has much more exprience in these kinds of competitions. He even already had some impressive victories, like the one against Wang Yuanjun in 2013 (at that time 6p, now 9p and the number 1 player in Taiwan).

The evening before the tournament there was an opening ceremony which included the official ceremony to make the draw. I've got Xie Ke 7p, Ilya's opponent was Yi Lingtao 7p. While my opponent was very well familiar to both of us as a young and bright chinese star, the opponent of Ilya was more mysterious to us. In the hotel room we checked his current results, and Ilya's conclusion was "somehow I don't like him". Approximately 50-50 against the top pros. We went through one of the games he played, and I asked Ilya a sarcastic question: "so did you find out his vulnerabilities now?".

The next day we went to play.


In my game I felt like I fell behind quite early on in the game, after the first fight. Yet I didn't feel like it was over yet, and kept on playing. At some point I even felt like some chances appeared, but I didn't use them properly. I used all of my playing time: 2 hours of basic time, and in the endgame I played with a byo-yomi of 1 minute per move. My opponent seemed a bit bored. He walked around, watching the games of the others. He used around 30 minutes of his time in total. In the endgame I knew it was hopeless already, but decided not to resign and played until the last move. In the end I lost by around 15 points.

XieKe_vs_Artem.sgf
Download Sgf-File
When I came back home, I checked my game with Leela. As expected, I fell far behind after the first fight. The game was more hopeless than I estimated. Although my opponent really did make a mistake, it did not give me the chances I thought it had, for even if I would play correctly Leela still gave me only around a 20% chance to win the game.

During the game I was completely focused on my own game, so I went to watch Ilya's game only after I finished my own one. He was still playing, and looked at me silently, asking with his view "how was the game". I shooked my head silently - a standard gesture meaning "I lost". And we both smiled, knowing that the question was rather sarcastic.

I looked at Ilya's clock. He was on his last byo-yomi period (1 minute), and still a good part of the game to play. Then I checked the situation on the board, and I couldn't believe my eyes: the situation was hopeless for Ilya's opponent! Ilya had captured the three stones that had once seemed to shape his opponent's territory. There was no longer a place on the board that could give a chance to reverse the game. Many players came to take a look at Ilya's game, and all of them had the same reaction: they smiled to each other and probably joked about their friend who was playing against Ilya. I knew that it was over, the same as all of the spectators and the two players. Ilya seemed to play the endgame well, and after the game was finished his opponent refused to count. Ilya collected the stones and asked me "but by how many points I won?..". I told that it was around 10 points. When you are on the last byo-yomi, you do not always have time to count the points. And by the way, Ilya's opponent used in total only around 30 minutes of basic time for all the game, the same as mine.

Ilya_vs_YiLingtao.sgf
Download Sgf-File
What can I say... I think in the modern Go history this is the biggest victory a european player has ever achieved so far. At home I checked the game. It wasn't like Ilya won accidentally. It seemed to be an even fight until his opponent made a fatal mistakes, dying with the vital three stones.

Here is the turning point of the game. After Ilya's attachment at move 209, his opponent obviously overplayed.

The plan becomes completely clear after move 239: white lost the vital three stones, and black even has sente after that. Between moves 223 and 234 white just made some hopeless moves.

For me the tournament was over. I wished Ilya good luck when I was leaving, and I really believed that he could win the next game. His opponent was the korean amateur Baek Hyeonu who beat the japanese player Mutsuura Yuta 7p in the first round.

I was already back at home when I saw the result: Ilya lost. Sad news. I asked him how was the game, and he told me "my power was exhausted in the previous game".

BaekHyeonu_vs_Ilya.sgf
Download Sgf-File
When I went through the game record, it was obvious that early on in the game the situation became tough for Ilya, and from there on, became only more and more desperate.

Despite Ilya losing in the second round, his first win was a great success. In my opinion, it's not only his success, but a success for all European Go. It demonstrates that we are improving. We shouldn't go to Asia thinking that it's going to be just a nice experience, a game against a stronger opponent. We can win. 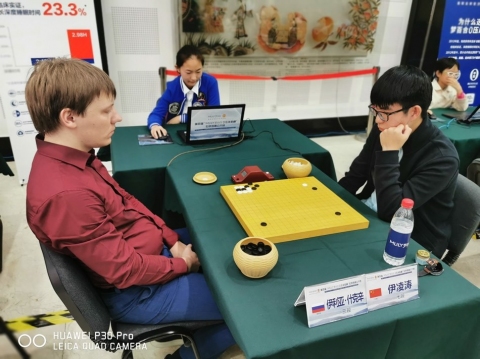 One thing:
> I think in the modern Go history this is the biggest victory a european player has ever achieved so far.

Depending on when “modern Go history begins … Hans Pietsch from Germany beat Yoda Norimoto 9p in 1997, in the 1st LG Cup.
https://senseis.xmp.net/?HansPietsch

Lukan
#2
15.10.2019 14:29
There is no question about that even not that well known Chinese pro (world's #54) is now stronger than Yoda at his peak 20 years ago.
SImikin
#3
01.11.2019 10:50
Thanks for great article Artem! Big up 4 European Go!
got
#4
01.11.2019 23:13
On the "who goes to next international competition" table I can see Frejlak but not Le Calvé. I remember it was close between them but Le Calvé won the pro title. Would Frejlak be eligible to go if he collected points if he is not a pro?
silviu c brinzei
#5
02.11.2019 13:45
I heard that Baek Hyeonwoo has been promoted to 1p after reaching the last 16 of a major professional tournament according to the Korean rules. I believe the European rules should have a similar rule and allow promotion to professional status for this type of performance.
Artem
#6
06.11.2019 11:31
@got: Yes, amateurs can qualify to the international events same as the pros.

Here is the document with the details: https://docs.google.com/document/d/1UH6KWyd5e4auof2Mo9l07sMPZO-29hfrjhdSXbVzMFI/edit.

There is no line that would state that only pros can get the "nomination points".

Also, in the standing page you can see other amateurs too, not only Stanislaw: https://docs.google.com/document/d/1UH6KWyd5e4auof2Mo9l07sMPZO-29hfrjhdSXbVzMFI/edit . This year Lukas Podpera 7d from Czechia also gained some points.

In international nominations, at the moment everything depends only on your results in the tournaments. Pro status doesn't bring any advantage.
peter broekmans
#7
09.12.2019 12:25
I love to read articles from Artem they are very readeble.