Back
Andrii Kravets fulfilled his quest. Ukraine has two EGF professionals.
By Jana Hricova | European Pros | 16.07.2017 17:07 | Views: 6287
The fourth European Professional Qualification (EPQ) is finally over, and we have to say that this year the competition was extremely tough and very interesting.

The tournament started with a double knock-out phase (the three rounds of this phase were played in Vienna) and ended with a single knock-out phase (the three rounds of the final phase of the competition in Pardubice). The top sixteen European players were ordered according to their ratings at the beginning of the EPQ and a fold pairing system was used - that is the 1st seed is paired with the 16th, the 2nd with the 15th etc. Nevertheless, after two rounds the 2nd seed was eliminated, and the 3rd seed also failed to survive the first phase of the qualification competition. Moreover, both, seeds 1 and 4 each suffered one loss during the first phase which was played in Vienna, and as a result, we arrived at an interesting and unexpected pairing chart for the final phase of the qualification tournament in Pardubice.The undefeated qualifiers for the final phase of the EPQ were Cornel Burzo (Romania), Lukas Podpera (Czech Republic), Rob van Zeijst (Netherlands) and Csaba Mero (Hungary). Players who lost just one game in the first phase in Vienna were Andrii Kravets (Ukraine), Viktor Lin (Austria), Jonas Welticke (Germany) and Oscar Vazquez (Spain).

All these eight players who had qualified for the final phase of the EPQ showed up in Pardubice, on Thursday, 13th of July, on time, and smartly dressed to comply with the required dress code. Oscar even bought a new suit just for this occasion.

The quarter-finals turned out to be a disaster for the so far undefeated players. Cornel lost to Andrii by 3.5 points, Csaba lost to Viktor by 6.5 points, and Lukas was defeated by Jonas by 5.5 points thus causing a big disappointment to his local fans. The disappointment was made bigger because Lukas had never before lost to Jonas until this game - this was their 10th game totether with Lukas won all 9 previous encounters. The only undefeated player surviving the quarter-finals was Rob, who managed to overcome Oscar. That match can be considered without any exaggeration as being a clash of generations as it paired together the youngest participant of the EPQ, Oscar is just 14 years old, and Rob who at 55 years of age was by far the oldest player in the tournament. If Oscar was the biggest surprise of the tournament due to his low age and lack of experiences, then we can undoubtedly say about Rob that it is very unusual to still play go at such a high level at his age, and we would be hard pressed to search through European history to find a compable player.The semi-finals brought together Rob against Viktor, and Andrii against Jonas. Rob lost to Victor by the lowest possible margin – half a point, while Andrii defeated Jonas on time, after a tough fight; Andrii was judged as being ahead on the board anyway.

Andrii confirmed in the final that he was, according to the EGF ratings, the strongest player in the tournament. After forcing Viktor to resign, he became the 6th EGF professional player (after Pavol Lisy from Slovakia, Ali Jabarin from Israel, Mateusz Surma from Poland, Ilja Shikshin from Russia, and his friend Artem Kachanovskyi, who is also from Ukraine).

The tournament ended with a small award ceremony where Andrii fulfilled the winner's duty and opened bottles of champagne. After this the players, the organisers, and the spectators, all gathered together to watch the new movie “The Surrounding game”.

All the games were broadcast on KGS and can be found, together with all games from the preliminary stage of the EPQ, here. All the games were commented by Pavol Lisy 1p and Mateusz Surma 1p not only on KGS, but also on a video stream. Video streams from the tournament will also be available on the EGF webpage. Both professionals made a very good job for go promotion and bringing the games to a wide audience of go fans.

The tournament could not have happened without an effort of the organising team to whom I would like to thank (Michal Zubalik – scribe, technical support, stream, Michal Timko – referee, scribe, Martina Simunkova and Anezka Bukovska – scribes, Jan Hric – scribe, technical support, Jaromir Sir – photos)
At last but not least we would like to thank the Czech Open Festival for providing their very generous support and the background for the tournament. 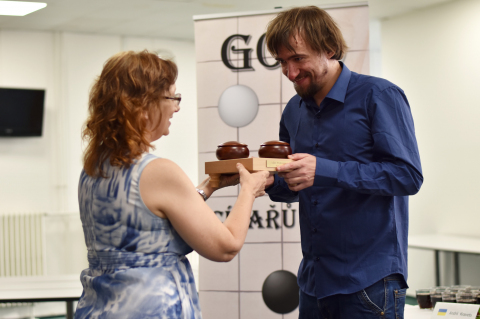