Back
Kim Jiseok 9p vs. Choi Cheolhan 9p
By Viktor Lin | Reviews | 10.10.2016 18:21 | Views: 3956 | Comments: 1
On 20 August 2016, two of the best players of Korea, Kim Jiseok 9p (White) and Choi Cheolhan 9p (Black), faced each other in the Korean league. A phenomenon occured that the grand majority of go players will never see in a lifetime in their own games: the Two-Headed Dragon.
That means, starting from White's attachment 106, not only did Black fail to inflict any damage to White, his impressive framework spanning the lower right quadrant of the board has been reduced to the feeble points Black has left now, thus earning White an overwhelming success in this fight.This sort of life, bearing the poetic name „Two-Headed Dragon“ is extremely rare and it's safe to say that most of us will never see it in our own games.If you are still confused why White is alive, compare it with this shape:

White's group, surrounding Black's indisputably living group, seems to have no real eye, but there are two spaces where Black is unable to throw in. So by connecting up two false eyes around Black's group, they become real eyes.Even though Kim Jiseok 9p still lost in the end, what happened in this game is certainly impressive, and we should congratulate both Kim 9p and Choi 9p for having achieved a Two-Headed Dragon in this game. 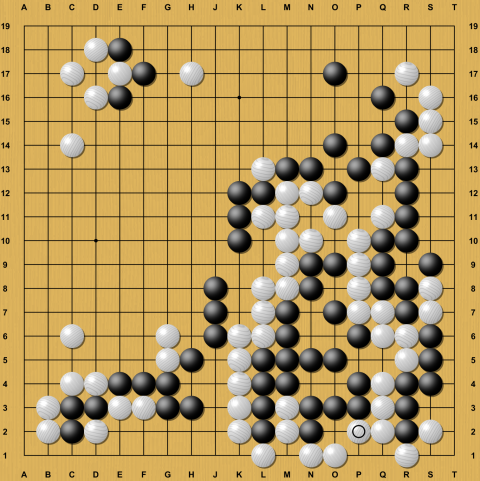 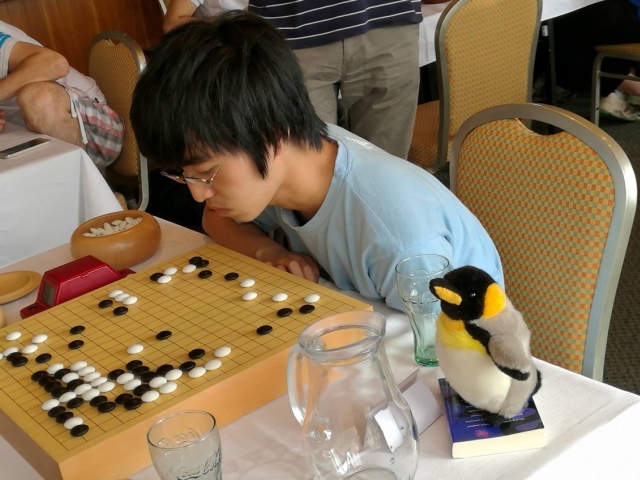