Back
Chinese C League 2018 was held from 10th to 20th June 2018 in Wuxi, China
By Artem Kachanovskyi | International | 05.09.2018 18:01 | Views: 6246 | Comments: 5
It was the second time that the European team took part in this league. The European Pro Championship 2018 in Vatra Dornei, Romania, was used to decide who would play for Europe, and the qualifiers were: Pavol Lisy 2p, Ilya Shikshin 2p, and me (Artem Kachanovskyi 1p). The last player was selected by the Chinese sponsors of our team - Tsinghua University. They picked Mateusz Surma 1p, the hero of the last year's C League. Last year Mateusz won 4 games in a row.

We decided to simply use our most recent ratings to fix the board order, so the team of Europe looked like this:
1. Ilya Shikshin 2p
2. Pavol Lisy 2p
3. Artem Kachanovskyi 1p
4. Mateusz Surma 1p

By way of reminder, allow me to explain that the Chinese C League is a 7 round team tournament with 4 players in each team. It's held at the same time and venue as the Chinese B League and the Female Chinese B League. The time control is 2 hours 25 minutes main time + 5 periods of 1 minute per move for the byo-yomi. One game is played each day, and there are 2 free days during the tournament to take a rest.
This year 29 teams competed in the Chinese C League. Our ambition was to improve on last year's result: to win at least 1 round, and not to finish in last place. This time we already knew how strong the opponents were going to be, and all of us realized that it was not going to be an easy task.

The competition started for us with a training game that we decided to schedule at dinner on the eve of the first round. It was a rengo (2 players vs 2), and I had an honour to play with EGF president Martin Stiassny against Pavol and Mateusz. They gave us 5 stones of handicap and it was a tough game, full of fighting, but in the end me and Martin won. We all know the sharp style of Pavol, and I was surprised by the way Martin succesfully handled almost all of the complications.

Attachment-1.sgf
Download Sgf-File
Due to the odd number of participating teams, the next day we got a victory without playing. It provided us with a good chance to study the games of our future opponents.

The C League teams are usually composed of low-dan young Chinese professional players, but sometimes the last board can be an amateur player. Some teams had a small kid playing for them on the 4th board, and even these kids demonstrated a strong playing level. As they were held in the same venue, and at the same time, we also had a chance to watch the B League and the female B League. The Chinese B League is a very serious tournament with many strong players participating. Some teams invited top korean players to play for them, this year I noticed: Park Yeonghun 9p, Kang Dongyun 9p, Yun Junsang 9p, Hong Sungji 9p. Also there was a Japanese team participating this year, with their rising young star Shibano Toramaru 7p playing on the first board. In the female B League they had 3 players in each team, and some of these teams had a player from South Korea too. Despite the fact that there is a separate female league, some C League teams had a woman playing for them.. Starting the next day we played the 6 remaining rounds. We were trying hard. Sometimes the victory seemed so close, but then it slipped away, but sometimes we could also manage an unexpected comeback. In general, I feel like the level of the C League players is slightly higher than ours, but I do belive that we can catch up! Just for comparison, here are the results from last year:
- 3 draws, 4 losses
- place: 26 from 26
Results by the boards:
1. Ilya Shikshin 1p: 1/7 (1 win in 7 games)
2. Ali Jabarin 1p: 1/7
3. Pavol Lisy 1p: 1/7
4. Mateusz Surma 1p: 4/7

Obviously, this year Ilya became the hero of the team.
Overall, I think we can call this year's results satisfying, but of course all of us will continue to work hard and we hope to get a better result next year.

Here are some of my game records. I managed to win 1 game only, in the 5th round. That game was close for long time, but in the endgame my opponent was stronger and moved into the smallest of leads. Then probably he estimated the position incorrectly and started a ko which he should not start, then making a ko-threat which turned out to be a fake one. After that he tried to use all of the remaining chances, but soon he resigned. In the games from the 4th and 6th rounds I made a serious mistake early on and the game was hopeless, but in all of the other games I had a good chance. Especially in the game from 7th round, in which I was leading for a long time from the start. It was a disappointment to lose it, but earlier I won a lost game, so maybe it's fair.

Ilya Shikshin Chinese league C round 31.sgf
Download Sgf-File
round 4, round 5, round 6

And last, but not least. This year our team had a special trainer: an AI called Golaxy. It was really helpful to review our games with it. Many thanks to Professor Yu for giving us this opportunity!

Here is an article about last year's C League: https://www.eurogofed.org/index.html?id=135 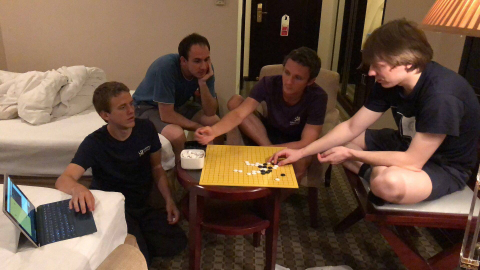