The Chinese C League 2019 was held in Quzhou, China from the 13th - 23rd June. It was the third time that the European team to participate in this competition. You can read about the two previous years in the following articles:

The sponsor of the European team is Tsinghua Weiqi Foundation, and thanks to their support it's possible for the European pros to get such a unique experience.

Just like it was last year, our team was built in the following way:
The three top players from the Pro Championship this year were:

Way to the С League

For me this time it was an extremely long trip. It started with the Kido Cup in Hamburg. The next day after the Kido Cup was over, I went to Beijing, the capital of China. There our team had some kind of a warm-up match with the Tsinghua University team. Ilya played against a female player Song Ronghui 5p, while me and Mateusz played against amateur players. Pavol couldn't join the match, as he was busy in Slovakia at that moment. From all of us only I managed to win my game.

Ilya_vs_SongRonghui.sgf
Download Sgf-File
The next day we had a long train trip from Beijing to Quzhou, the distance is approximately 1500 km and we covered it in 8 hours.

All of us knew more or less what to expect from the next day. Ilya, Pavol and Mateusz already played in the C League in the two years previous, while for me it was going to be my second time.

I think all of us felt optimistic about the upcoming games, at least me and Ilya certainly did. Pavol was not so confident, as the last C League he was crashed in nearly all of his games. Mateusz is usually more of a realist than an optimist. Me and Ilya seemed to be convinced that we got stronger in 1 year that passed. By the way, even after the end of the tournament my opinion didn't change, just maybe I became slightly less optimistic. It still feels like we can do better in this tournament, and that we are improving.

After the train we had a night to take a rest, and the next day the tournament started.

The schedule of the tournament was the following:

It seems like Ilya played some really strong chinese player. For Ilya it was hard to find a chance in that game.

Pavol played against a japanese player. Pavol managed to keep the game relatively even, but slowly he was falling behind, until it became too bad.

Mateusz was not doing well at all, but at some point he has got a real chance for killing a big group... which he didn't manage to use correctly.

I played against an amateur player who was a pro in the past, but resigned the pro status. I started my game well, gaining advantage in an early fight. After that I played too passive, letting my opponent make it an even game again after the middle-game. In the endgame we were going even, until I made a fatal mistake and died with a group.

We managed a draw.

We concluded with Pavol that this match showed how usually each of us plays. Ilya put up a huge tsumego problem for his opponent: running groups, the whole board on fire. Pavol died in the first corner and tried to do something after that. Mateusz created three weak groups and tried to survive with each of them. If I remember well, two of the three groups died. I played a more or less balanced game without too much "trash" fighting, winning by a small margin in the end.

Ilya lost a game which he was winning. That was a pity.

Pavol managed to start the game well. But then in the complicated fight his opponent managed to find a very sharp way to kill Pavol's big group. After that the game was hopeless.

Mateusz has got a tough opponent again... At this point we all felt sorry for him. In all the three rounds me, Ilya and Pavol had absolutely playable opponents. But Mateusz's ones seemed to be stronger for some reason.

I played against an amateur child again. This time I didn't manage. But after we watched my game with the teammates, we all concluded that he played solid.

A match against 4 girls. After the match only Ilya said that he had not an easy game. For the rest of us, it was at least easier than the other C League games.

This was our first victory in the C League for the whole three years of playing in it. Frankly speaking, we didn't play any other match against a team of 4 girls. Nevertheless, a win is a win, and that was a historical moment.

My opponent, the opponent of Mateusz, and Pavol's one, had hopeless positions on the board at some point. They looked at each other and shaked their heads, showing that the game is hopeless. Soon after that all the three of them resigned, within a minute. We couldn't stop smiling, because it happened: we finally won a match.

In the fifth round Ilya had a hard opponent. Ilya started his game not so well, but then he managed to kill a big group. Even after that it was still an unclear game, and Ilya didn't manage to keep it.

Pavol started his the game well. It was a very complicated situation when his opponent entered byo-yomi, and soon the game turned completely to Pavol's favor.

Mateusz had a hard opponent again. The game looked desperate for him most of the time.

I managed to win a one more amateur child. This one me and Pavol called a "confident kid", because he seemed to be confident no matter how bad was the position.

By the way, this is one of our ways to remember chinese players. As it's hard to remember their names sometimes, we give them our own funny names. For example, one player we call "the doctor", because he dresses exactly like a doctor. We even thought that maybe in night he works on a night shift in the hospital, and in day he comes to play in the tournament.

This time Ilya lost by a half point. Such a pity.

Pavol had a strong opponent, and probably didn't belive in himself too much. Later the AI told us that Pavol was ahead at some point, but the rest of the game he was falling behind.

Mateusz's opponent was a familiar player from the Ge Yehong Go Academy, at which Mateusz studied under the CEGO Program. After the game Mateusz told that he was too strong.

My game I lost by one move. I was doing well from the start, and after 80 moves a group of opponent's stones was dead. It was only left to complete the kill carefully, but with move 90 I made an unnecessary exchange, and the game was lost just with that one move...

To be honest, I think the last two rounds we all were too tired already.

Ilya lost. He said he had good chances, but I guess his opponent was just too good. We were told before the game that this team has a teacher on the first board, and students on the others. So we called it in a funny way "teacher with students". I guess Ilya's opponents was just too good for us now.

Pavol was doing well, I think his opponent didn't take the game seriously at the start. But then he started to think, and Pavol didn't manage.

Mateusz was trying his best, as always. At some point it was a favourite Mateusz's game: 3 weak groups, more points, just need to survive with all. But this time he didn't survive.

I played against a child again. This child we called "the serious child", because he is really serious. Unlike the other kids, he uses his time well. Doesn't hurry up, and doesn't seem confident when the situation is not so. It was a nice game, and in the end the child was better than me.

Besides the Go board

After each round we reviewed our games with the AI. As well as studying our own games, we also just took a chance to rest after hard tournament games. Such things as a dinner, walking outside, playing the cards game "coinche", and watching top pros playing on Fox Go Server were our choices. We combined them in various sequences. Although when we wanted to walk we preferred to do so closer to midnight, otherwise the weather was too hot and humid.

Parallel to the C League there was also the B League and the Women's B League running at the same venue. Those of us who finished our games earlier had the opportunity not only to watch the games of our teammates, but also to enjoy watching some higher level games in the B League.

I think that this year we've had a new achievement: a match victory in the C League.

Altogether it was a good experience to play together as a team for a while, and I believe also that it was very helpful for all of our Go skills. I hope that we can participate in this tournament next year again, and show better results of course. 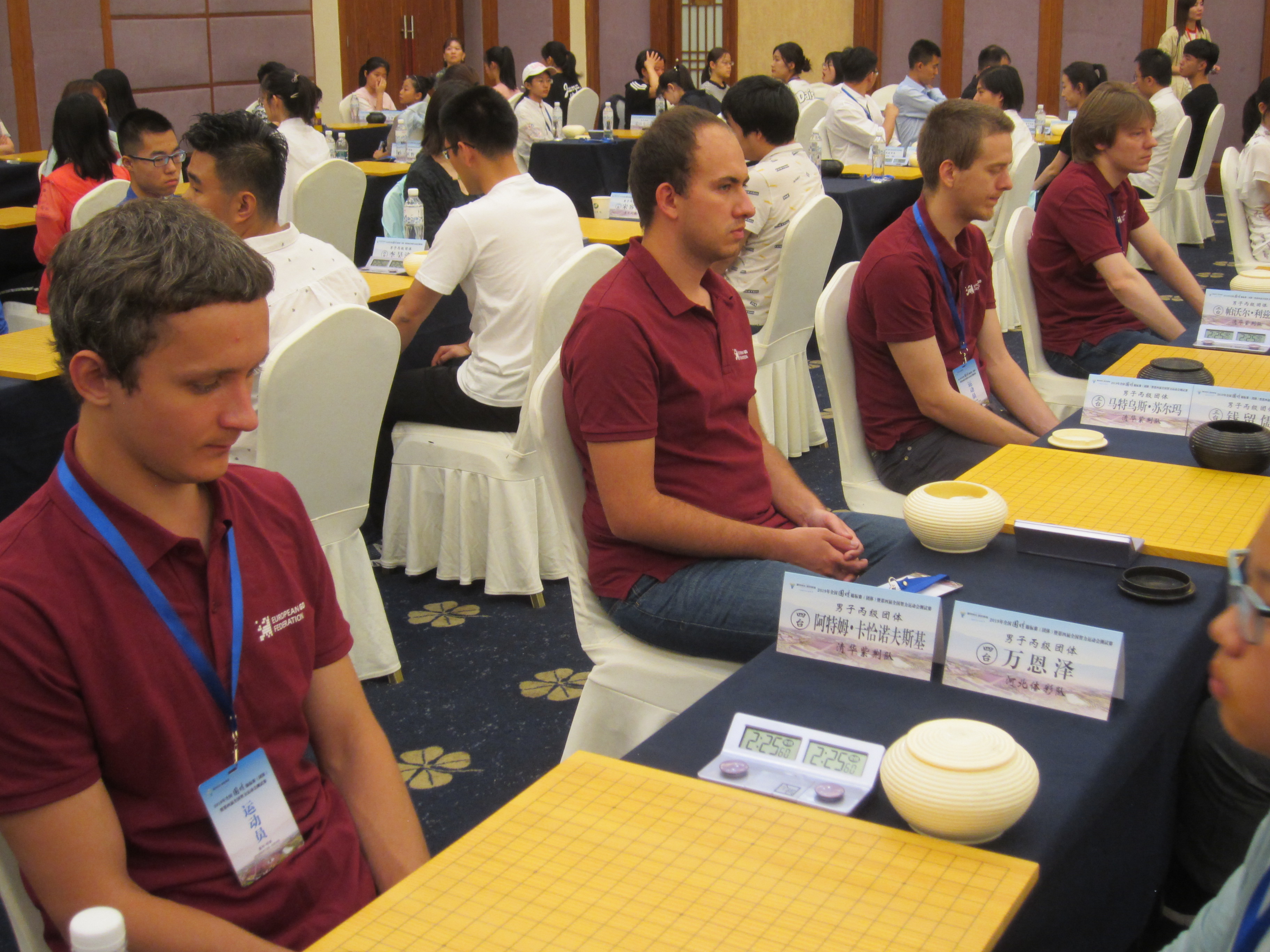 Comments:
Jarda
#1
19.07.2019 8:31
Thanks for the report and for the win! It would be also nice to hear more about the playing hall, surroundings, and travelling around.
Artem
#2
20.07.2019 9:02
Everything was typical for this tournament and China in general, maybe this is why I didnt really write about it.

Tournament hall was a big hall of the hotel in which we stayed. The B League and the Female B League was played there aswell, at the same time. So the hall was full of Go players, so many people. You can see on the photos, there is a link for the photoalbum above. The atmosphere was mostly serious, but in some way also similar to our european tournament: they could talk and joke, sometimes even during the game, but rarely. In the B League it was mostly much more serious.

We didnt have any sightseeing tour, just walked by ourselves. There is not much to see in that city, just a park and a mall... Typical chinese city: from beton and asphalt, not very green, crowded, abit dirty. In night there is some fresh air, but only in night.

The food we had in the hotel: a buffet with the chinese food mostly. For us it was not so easy, usually we could find a couple of dishes that we can eat. But it's fine, a food is a food. By the way, traditional dish from that region of China is a plate full of heads of rabbits and ducks... And it's considered delicious. Mateusz and Pavol even dared to try.

If you have any other questions, feel free to ask!

Sebastian
#3
29.07.2019 16:52
Artem, thank you so much for this article and comment. It was very interesting and understandable.
Nereo
#4
23.11.2019 2:31
The important is the experience. A win was possible more taking in count that China has millions of go players (And a very good number of pros), and that they start from child (I don t know European numbers).
Go in China has thousands of years, so they have great advantage. Any tie for Europe is a win too
If B league is much more serious, A league must be more too.