Now it has not escaped my notice that many of our players do not know what the European Grand Prix is. So before talking about the Grand Prix Finale itself, let me explain in a few words how the Grand Prix is structured.

As we can see, the number of tournaments included in the Grand Prix has been growing since the system was established (year 2014). In my opinion, this fact indicates that the European Grand Prix is being developed in a succesful way.

The tournament system is described in detail at the tournament website. It reminds me a little of system that is used in the UEFA Champions League football competition. There is a preliminary (group) stage and a final stage. Players are seeded into their groups from different pots. Inside the group it's a round-robin system, everyone playing against everyone. Then the top 2 players from each group are then qualifying into the final stage. In the quarter-finals the number 1 from a group plays against the number 2 from another group. Then in the final stage the top 8 places are determined exactly.

As for the prize-money distribution, it is also made in an interesting and innovative way. I would call it "flat", as the prize-money are distributed in a more even way than it usually happens. Also it is made so that a player gets paid not for the place he finishes in, but actually for each victory he achieves.

This year's tournament was held in Palacky University of Olomouc (Czechia). The accomodation was just across the road in the students' dormitory, so it was very convenient for the participants.

The tournament started from the lottery for building the preliminary stage groups. A few days before the tournament Christian Pop 7d (Romania) informed that he cannot participate in the tournament. So Nikola Mitic 7d (Serbia) was chosen to play instead of him as a substitute.

After the lottery, it was the time for the first round. Somehow the tournaments schedule during the year is made so that before this tournament we have a few months break from serious tournaments. But starting from this one, tournaments come quickly one after another, thus creating a kind of "season". So for me it was a worrying moment, my first game after a long break.

In the tournament tables given below a white circle means a victory, and a black one means a defeat.


During the group stage I wouldn't say any sensation happened. Groups A and B both had 2 European pros in them. Group C had Mateusz and Alexander Dinerchtein 3p (Russia). In the Group D things were not so clear.

In group D Dusan Mitic 7d (Serbia) was pretty unfortunate. He won his first 2 games and it seemed like he had entered "unstoppable" mode. But then he lost in the 3rd round to Lukas Podpera 7d (Czechia). As Lukas and Stanislaw Frejlak 7d (Poland) both won 2 games as well, they were qualified for the quarter-final, as they won in the 3rd round of the preliminary stage.

As a break between the preliminary stage and the final stage of the tournament, let me tell how the  boadcasting that was organized.

As well as the usual games broadcast to KGS, there was a live stream to Twitch. There was some special video equipment installed around each board, and we the players were asked not to disturb it.

The games were commented live by the stream organizer Stephen Hu 5d (Germany) and his colleague. It seems like this kind of broadcasting becomes a standard for the European Go Federation. It is announced that there will be a live Twitch stream at the 4th European Professional Championship (Jena, Germany, 05.03.2019 - 08.03.2019) and the 5th Grand Slam Yike Cup (Berlin, Germany, 25.04.2019 - 28.04.2019). If I understand correctly, around 3000 users viewed the online broadcast this time.

In the quarter-final Mateusz won against Ali. It was a tough game, ending with the minimal margin.

egpquarter.sgf
Download Sgf-File
For me it was not easy to win against Stanislaw. The game was not good for me from the start, but he didn't manage to keep his advantage. He had just come back from his studies in China at CEGO program and it is obvious that he improved. He said that they studied a lot with Leela there. I would say that his knowledge of the opening became significantly stronger, and his style changed to become more flexible and peaceful (before he liked to fight like crazy).

In my semi-final game against Pavol I overlooked his possibility of a sharp invasion. After that invasion a ko for my group started, and I didn't manage to find good enough compensation, thus I ended losing the game by a big margin.

egpsemi1.sgf
Download Sgf-File
Mateusz's game against Ilya ended up with a minimal margin again, but this time not in favour of Mateusz. After the game Ilya said that it was a hard game for him, Mateusz was ahead during all of the game. Only in the very end of the game Mateusz allowed Ilya to play a ko for the neutral points and to win it, thus winning by 3/4 stones only (1.5 points).

egpsemi2.sgf
Download Sgf-File
In the other 2 games Stanislaw won against Alexander, Ali won against Lukas.

In the game for the 3rd place I met Mateusz. He got a better position at the beginning, and at some point the game was desparate for me. In the last complicated fight during the middlegame Mateusz made a blunder under the time pressure. He was catching up later in the endgame, but that was not enough - I won by 3.5 points. Later we agreed with Ilya that it seems like Mateusz improved his skills in the opening. Both of us had lost positions against him after the beginning. Mateusz said he studies with Leela recently.

egpfinal.sgf
Download Sgf-File
In the other 2 games Stanislaw won against Ali, Alexander won against Lukas.

The final standings were the following:

Congratulations to Ilya! By the way, after winning this tournament he became 3p!

Except being a competition, this tournament was a nice way to meet for all of us and enjoy playing Go together.

In parallel with the preliminary stage of the Grand Prix Finale, a qualification tournament for the Globis Cup was organized. Globis Cup is held in Japan and it can be called a World Championship for the under 20 category. The winner was Anton Chernykh 6d (Russia), who thus become the representative for Europe for the upcoming Globis Cup.

During the final stage of the Grand Prix Finale there was a weekend tournament organized called Olomouc Tournament. So the players eliminated from the Grand Prix Finale were not left idle, they could participate in the other tournament. It was a big international event, gathering 95 players from 12 countries. The winner was Tanguy Le Calve 6d (France), followed by Dominik Boviz 6d (Hungary) and Remi Campagnie 5d (France).

I created a photo album with a photos made by EGF president Martin Stiassny. Enjoy! 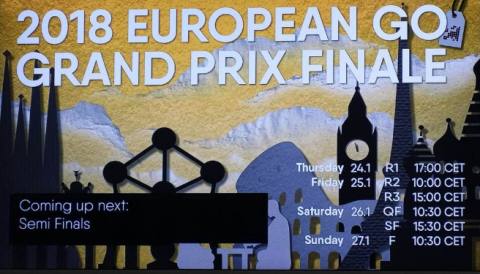